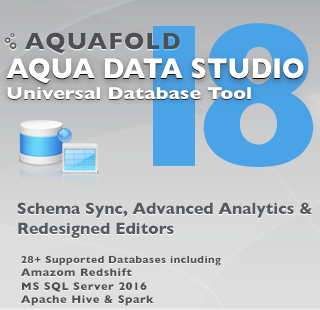 “The ability to synchronize database schemas has been one of our most frequently requested features,” explains AquaFold’s CEO Niels Gron. “We’ve added synchronization capabilities for the four major database vendors and will continue to add more in the next release.”

“Over the past decade, customers have come to expect richer capabilities built into the editor,” says Gron. “To effectively meet this growing demand, we’ve re-engineered our editor framework to be more extensible and delivered many usability and functional enhancements.”

The redesigned editors offer enhanced Status, Annotation and Marker bars, streamlined Find and Replace functionality, zooming in the active editor, and Punctuation completion features such as automatic completion of brackets and quotes.

Version 18 offers a new tool called Connection Monitor which provides the ability to ping database connections on a periodic basis, refresh results in your Query Window at a specified interval, and turn on auto-commit after the idle threshold is exceeded. Improvements to Visual Analytics include support for symbol map and bullet charts, fixed axes support, advanced sorting, relative date filters, exporting to PDF files, redesigned calculated field editor, chart highlighting, and much more.

Aqua Data Studio 18.0 is localized in 9 languages and works with Windows, Mac OS X and Linux. It is available for immediate download at https://www.aquafold.com/aquadatastudio_downloads/
. You can view the complete list of new features and enhancements at http://www.aquaclusters.com/app/home/project/public/aquadatastudio/wikibook/New-Features-18.0/page/0/What-s-New-in-Version-18-0.

The cost of a single-user commercial license for Aqua Data Studio 18 remains $499.00 USD. Current license holders with expired subscriptions can renew their subscriptions for $174.65 USD, which is just 35% of the new license price.

AquaFold, Inc. is a provider of database software tools for relational databases. More than 300,000 users from over 98 countries use AquaFold’s products to design, develop, model and administer their relational databases. AquaFold is headquartered in Austin, Texas. For more information, please visit https://www.aquafold.com/.