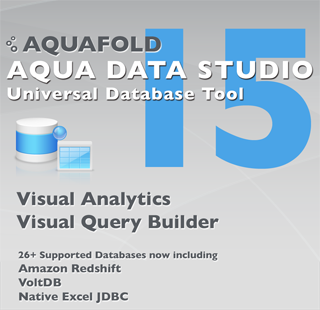 Sunnyvale, CA — September 16, 2014 — AquaFold, Inc. has released Aqua Data Studio 15, a major upgrade to its universal database query and management software, with new features to create visualizations that illuminate your underlying data. In just a few clicks, Aqua Data Studio 15 can now combine pivot tables, charts, graphs, and other visualizations into interactive dashboards and workbooks, which can then be shared with colleagues and customers.

“Instinctively we make more thoughtful observations about large amounts of data when we see it visually as graphs, charts, and trends,” explains AquaFold’s CEO, Niels Gron. “Aqua Data Studio 15 turns any query into visuals that are immensely useful. You can share data in a way that is instantly accessible and allows others to navigate and interact with it freely.”

Bringing data to life in Aqua Data Studio has never been simpler. Users drag and drop elements to combine and pivot datasets into visual representations, from pie graphs to trend lines. Even different types of charts can be combined to display data individually or merged into a single graph. Additional calculations and filters, including moving averages or running totals, can be added instantly to gain greater insight.

“The possibilities to create and share compelling visualizations and dashboards in Aqua Data Studio 15 is limitless,” notes Gron. “You can analyze and share big data faster and more effectively than ever, which leads to better collaboration and smarter decision-making.”

“Hosted databases offer cost savings and simplicity that are very attractive to companies,” says Gron. “We’ve ensured that they can continue using Aqua Data Studio whether that database is on the company’s own server or moves to the cloud.”

Along with Aqua Data Studio’s visualization improvements, the completely redesigned Visual Query Builder is more powerful and easier to use than ever. Users can now generate complex queries visually by dragging and dropping without ever typing a SQL statement. New to this version is a better way to visualize table unions, and support for subqueries. The main query appears in its own tab, while unions and subqueries are built in additional tabs to keep complex queries more organized.

Also improved in version 15 is Bulk Import of data. Multi-megabyte files with hundreds of thousands of rows now take seconds instead of minutes to import.

Aqua Data Studio 15 has also gained the ability to connect, query, and generate database-style results from Microsoft Excel files, making one of the most frequently used file formats on the planet even more useful.

Support has been added for Amazon Redshift and the NewSQL relational database VoltDB. Hive support is much improved with drivers for MapR, Cloudera, and Hortonworks, support for HiveServer 2 and legacy support for HiveServer 1, as well as greater security with Kerberos authentication. Database support has also been upgraded to include Vertica 7, DB2 10.5, MongoDB 2.6, and more.

Aqua Data Studio 15.0 is localized into 21 languages and works with Windows, Mac OS X, Linux, Solaris, and the Java Platform. It is available for immediate download at https://www.aquafold.com/aquadatastudio_downloads/. A complete list of new features and enhancements may be viewed at http://www.aquaclusters.com/app/home/project/public/aquadatastudio/wikibook/New-Features-15.0/page/0/What-s-New-in-Version-15-0.

The cost of a single-user commercial license for Aqua Data Studio 15 remains $499.00 USD. Current license holders with expired subscriptions can renew their subscriptions for $174.65 USD, just 35% of the new license price.

AquaFold, Inc. is a provider of database software tools for relational databases. More than 300,000 users from over 98 different countries use AquaFold’s products to design, develop, model and administer their relational databases. AquaFold is headquartered in Sunnyvale, California. For more information, please visit https://www.aquafold.com/.